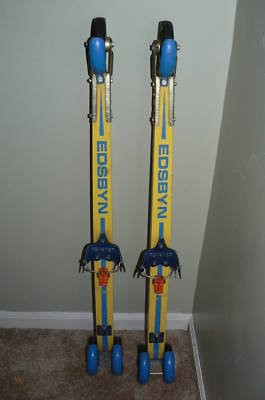 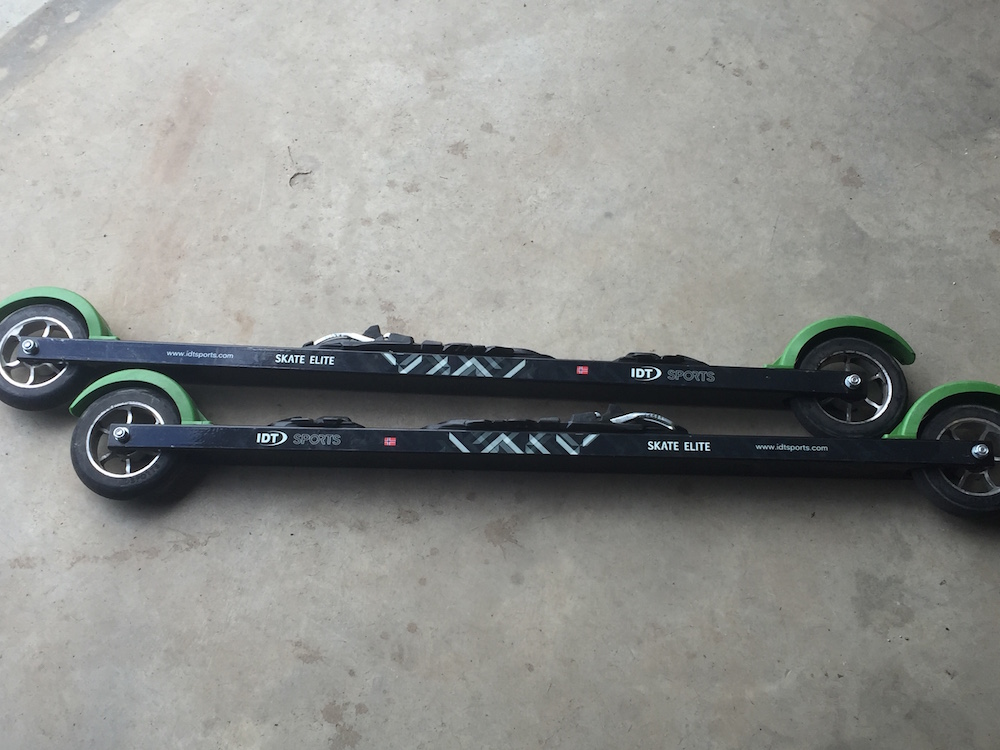 Fast forward to today and I’m still using rollerskis regularly. The technology hasn’t changed nearly as fast as cell phones or flat screen TV’s but they are now so much easier to use that it is possible I spend more time on rollerskis than watching TV. What hasn’t changed is that I still get stared at. Along with the apprehensive stares I also get a lot of exclamations – “whoa, that’s cool!”, or “that looks like fun, is it hard to do?”, and of course, “what do you call those?”. They are cool, they are fun, it is hard, yet it is surprising that more folks in Portland aren’t rollerskiing. 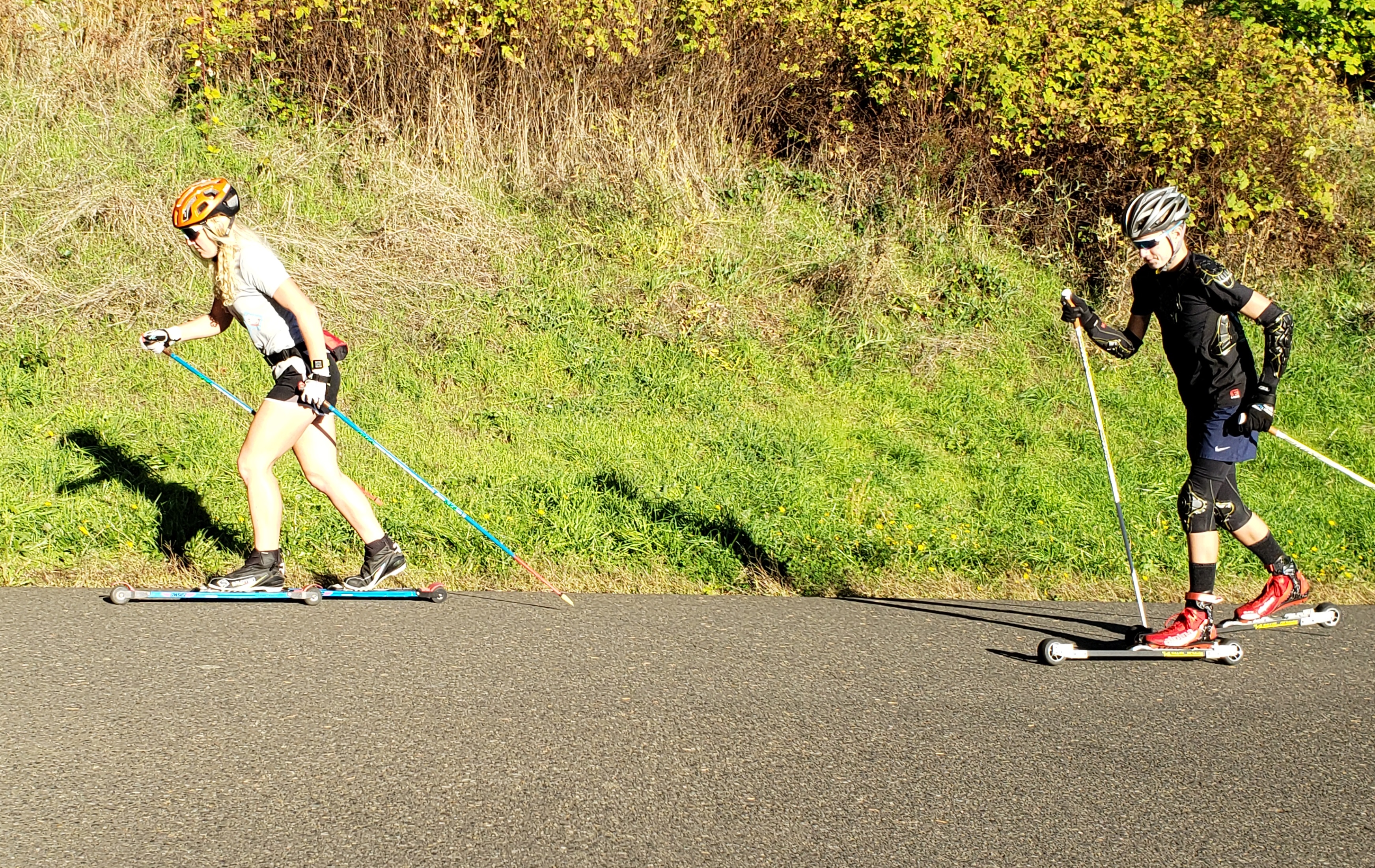 Cross country skiing in winter enjoys a solid participation level from Portlanders. Part of its appeal is that it combines fun with quality aerobic exercise. Excepting of course the aches and pains that occur after the first outings of the season. Enter rollerskis.

Cross country ski racers are considered by exercise physiologists to be some of the most fit of all aerobic athletes. The non-impact nature and full body muscle recruitment of the sport makes that not surprising. And training during the non-snow months makes race skiers the champions of cross training, as they will run, hike (with poles!), bike, row, flatwater kayak. And rollerski.

Rollerskiing has several positive attributes. From a training aspect it meets the primary focus of specificity; the muscle engagement pattern that is the same for skiing on snow. It is low impact and thus can allow large volumes of training time while avoiding overuse injuries. Of special note is the value of neuromuscular response, as rollerskis mimic snow in such a positive way that movement efficiency can be improved dramatically. In some cases the movements on rollerskis require a higher level of intrinsic feedback – meaning that if something doesn’t feel right, you probably are doing it inefficiently. This is a wonderful feature as I’ve seen many skiers who get away with poor technique on snow finally feel the difference and make the necessary changes once they start rollerskiing. 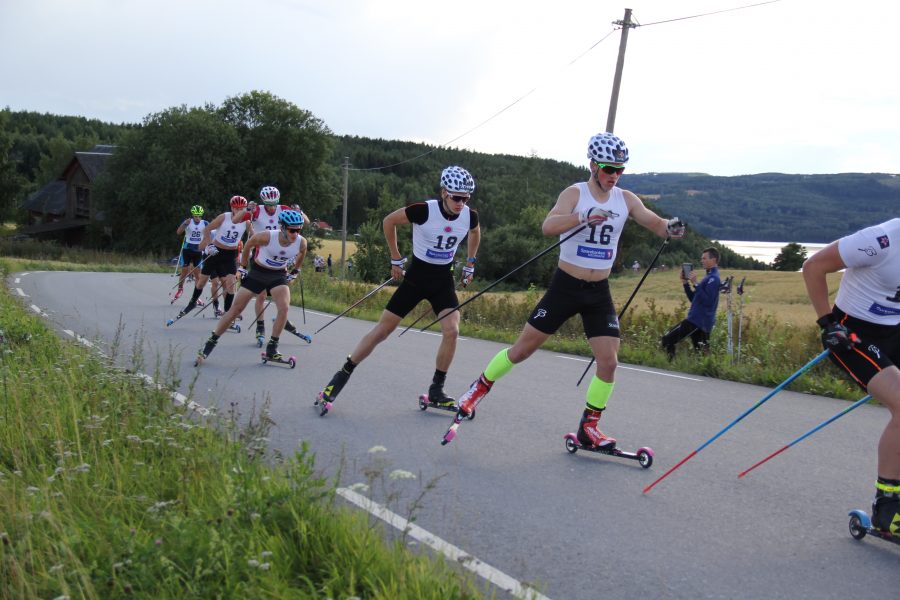 So what are the downsides? What safety protocols should one use?

Most significantly: they don’t have brakes. Brakes are available in some cases, but the necessary skill to employ them and low effectiveness has about the same task level as developing the personal skills that can control speed. In other words, best to get some coaching! There is a funky version of a snowplow that is reasonably effective to slow down on moderate slopes, but while it looks similar to the on-snow version the application is different. Most important is the ability to maneuver quickly to avoid hazards and while this is at first a bit more difficult than on snow, the skill transfer to snow is remarkable.

Scouting a location is critical, and exercising personal judgement. Several years ago a posse of the Norwegian men’s national team were on a rollerski workout and started down a steep hill, but none of them had been down it before nor previewed it nor questioned one another about the very idea. Fortunately the hospital visit was limited to treating abrasions. Just like “hucking”, scout your landing before you commit!

Once you have a location scouted and matched to your ability level, keep in mind the influence of weather or season upon it. For example, several of my favorite places become scary for skating once the fall leaves start decomposing. Heavy rainfall that disperses some new gravel can make for an unpleasant surprise.

The US Ski and Snowboard Association makes note of several best practices, here’s a link to a Fasterskier

It is likely you have a preference already as many fitness skiers only skate, and some touring skiers only classic.

For a dedicated racer the answer is simple, it is best to have both. If the price of entry is too high I would emphasize getting skate rollerskis, for the following reason.

1) The larger diameter wheels tend to roll over rough pavement better, and the narrow tire profile is more likely to “kick” a piece of gravel out of the way. The wider classic rollerski tires have an unpleasant tendency to get jammed when hitting a rock head on – the ski stops, you don’t.

3) The ratchet mechanism on classic skis that provides “kick” isn’t realistic in comparison to a snow ski. It is far too easy to push too long, leading to poor kick timing, poor weight transfer, and a bad time on snow. At least for the beginning a coach’s eye upon you is a good idea.

4) Since for classic skiing one of the very best rollerski workouts is just double poling, skate rollerskis can do very well for this.

In conclusion, if you love the fitness aspect of cross country skiing and enjoy regularly working out, if you’re not rollerskiing you might be missing out on an enjoyable experience. Unless you get very uncomfortable being stared at.