Free Shipping on Orders over $49.99
|
Save 20% on Black Diamond Approach Shoes
|
New OMCgear Members use 'OMCGEAR15' to save 15% on First Order of Full Price Items

Part One. Boots, boots, and boots.

Yearly posts about “what’s new” in Nordic skiing always seem to focus on the racing and track skiing side, yet touring and backcountry touring gear sales far outstrips that category.

That may be because what day touring and backcountry users value in gear is reliability and long proven performance, there’s not a “race” to develop big changes.

An example is the Rottefella NNN-BC binding system. Around since 1989, the NNN-BC system had to overcome resistance from users of the long-standing 75mm (aka, 3-pin) binding system. But after a few years the NNN-BC – especially the Magnum (https://omcgear.com/rossignol-nnn-bc-manual-bindings-magnum/), has become the standard for backcountry skiing. Lighter versions (https://omcgear.com/rossignol-nnn-bc-auto-bindings/) are a top option for day touring skiers who want a bit more stability and downhill control than is offered by the standard Rottefella NNN, Fischer or Rossignol Turnamic, or Salomon Prolink binding systems.

The older 75mm system still has a place. Offering just a bit more downhill control than the NNN-BC it may be a better choice when paired with Nordic skis with a waist width greater than about 70mm; borderline examples would be the Madshus Panorama 68 (https://omcgear.com/Madshus-Panorama-M68-Backcountry-Touring-Ski/) or Fischer Excursion 88 (https://omcgear.com/Fischer-Excursion-88-Crown/Skin-Xtralite-Cross-Country-BC-Ski/) which are seen with either 3-pin or NNN-BC bindings, while the Rossignol BC100 ski (/Rossignol-BC-100-Positrack-Backcountry-Ski/) is more clearly better matched with something like the Voile 201 3-pin (https://omcgear.com/voile-201-telemark-3-pin-bindings/) or 3-pin cable (https://omcgear.com/voile-3-pin-cable-binding/).

Despite the extra downhill power, 75mm does have some liabilities. It isn’t as standardized as skiers think as the thickness of the “duckbill” can have a lot of variation. Match it wrong, and a thick sole as found on plastic boots won’t allow the bail to be clamped down, but at least this is a no-go situation. More often the bindings made for boots with very thick soles such as the otherwise great Voile HD Mountaineer bindings (https://omcgear.com/voile-hd-mountaineer-3-pin-telemark-bindings/) are improperly matched with boots using thinner soles and this leads to excessive pin-hole wear and even a destructive ripping out of the sole. A great reason why many opt for the backcountry security of the Voile cable bindings. And any of these options deliver more resistance to efficient striding when compared to NNN-BC.

This may be the year that one no longer has to “pick their poison”. Enter the Rottefella Xplore binding system. 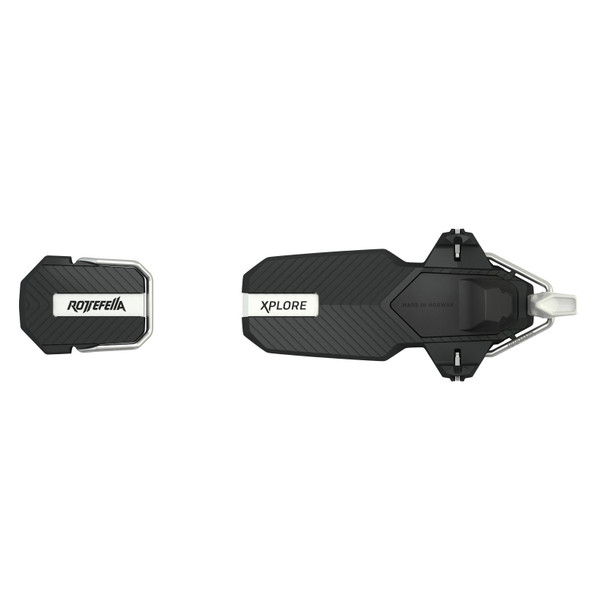 Long in development, last year there was a soft marketplace entry that allowed real field testing to occur.

Details to follow but suffice to say that for this tester, after using the Xplore binding (https://omcgear.com/rottefella-xplore-backcountry-ski-bindings/) with an Alpina Alaska XP boot (https://omcgear.com/Alpina-Alaska-XP-Backcountry-Ski-Boots/) I promptly put my beloved Alpina Alaska NNN-BC boots up for sale, and for the coming winter I will be converting all my BC touring skis to the Xplore system.

There’s appreciable improvement in every skiing performance feature. Without the long groove in the sole that NNN-BC boots have, the not infrequent backcountry ski need for walking is a far better experience. This also means that there’s no snow to get clogged in the boots sole that will compromise snapping into a binding. Indeed, stepping into the binding just might be the easiest to do of any ski binding category I have used. As is getting out! For those situations where a fall leads to one flailing in a crater of snow and struggling to release their boots from the binding the Xplore is clearly less hassle.

Striding performance is supreme! The fluidity in striding is bettered only by full classic racing systems. The Xplore has a feature to eliminate the resistance from the typical Nordic binding bumpers that feels more like touring using an AT Tech binding. This is a personal style choice but I found this option preferable when breaking trail in deep snow and doing kick turns.

But how about downhill performance? Here, the performance is noticeably better than the NNN-BC, that a tough thing to do! Edging is certainly better but when steering in a turn the Xplore really shines. But is it better than a 3-pin or 3-pin/cable? Here I would say that the discussion would have to include boots as it possible to get boots significantly burlier in the traditional system. For similar boots, such as an Alpina Alaska 75mm vs Alaska XP, it is close but the 75mm still has a bit more downhill power.

Of course, there are downsides. To support the extra power the pinhole pattern of the Xplore is much wider than NNN-BC, so a retrofit will require drilling new holes in your old skis. The Rottefella Xplore bindings will cost more than an NNN-BC Magnum or a Voile 3-pin Cable, no surprise there. There will be a large offering of Xplore compatible boots from nearly all the manufacturers that will exceed what is available for 75mm boots but guess what – there’s this ongoing issue called “supply chain” that will either delay or make scarce the new selections. If you’re tempted, don’t delay if something becomes available!

A Finishing Note about Alpina BC Boots.

It is fair to say that Alpina NNN-BC boots have been the holder of the field for decades. So much so that there are some selections that have been unchanged for 10 to 20 years. The frequent updates in Alpina XC Race boots have led to fit and performance improvements and it was time Alpina transferred what they’ve learned into their BC ski boots.

That’s right, no more BC 1550! Or BC Montana, or BC Wyoming. The venerable Alpina Alaska BC and Alaska 75 will continue – sigh of relief!

The new offerings are superb and there will be choices at multiple performance and price levels.

But you’ll have to wait, the new boots are not likely to be seen in stores until November at the earliest.