For most of January, into February I was given the opportunity to prepare skis for the US Nordic Combined team. This blog will be a multi-part reflection on the experience, detailing the actual work of a ski-tech, the travel, the best (and worst) of European XC ski destinations, the life of an American athlete on the road, and more. The story begins in Austria, spends some time in snowless eastern Germany, makes a couple stops in Norway, and ends at the American Birkebeiner. Follow the journey weekly on the OMC blog.

It’s strange now to read back over my journals from my time with the team. Little over a month has passed since there were ski races to prepare skis for, international flights to catch, ferries to board, team dinners eaten together, hotels to check into. None of it is happening now. None of it will happen for an indeterminate while. This is our duty and reality. But I don’t think it highlights the triviality or insignificance of sports. In fact it gives me even more appreciation for them.

At their core, sports are not only a source of entertainment, they are an outlet for healthy competition. There are justifiable arguments and countless examples of how sport has been co-opted by greed, but when all of it is stripped away, we find that competition can bring about beauty. We watch highlights of basketball players hitting impossible 3-point shots, climbers dangling by their fingertips on seemingly nonexistent flakes of stone, skiers gliding up hills most of us struggle to walk—we appreciate other humans showing us what we previously thought impossible. If art shows us the awesome capabilities of the imagination, sports show us those of the body. I hope that to some degree, we can eventually return to sports with a more mindful and appreciative attitude.

The second week of my trip was the most low-key. The next weekend of competition was to take place within an hour’s drive, in Klingenthal, Germany, so we basically stayed put and rented an Airbnb just over the Czech border in a little ski village called Bozi Dar, not far from Karlovy Vary.

Karlovy Vary is a beautiful town. Besides the annual international film festival, its claims to fame are the warm mineral springs which flow from various fountains throughout the old city center. Visitors walk through town carrying ornate sippy cups, filling them at each fountain; the water is said to promote good health. When we did our afternoon of touristing there, I brought a shot glass in my pocket. To me it tasted like warm ocean water. 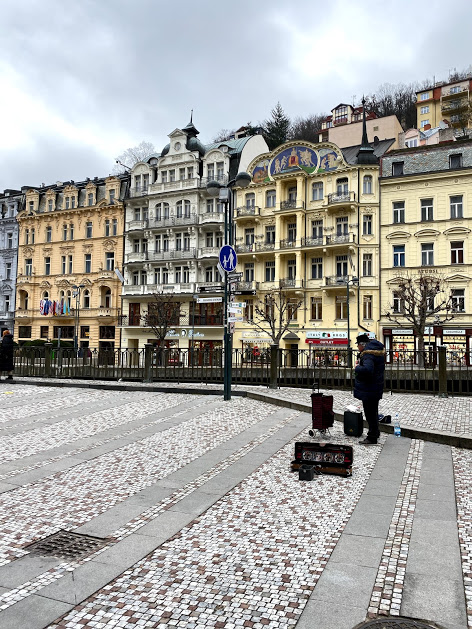 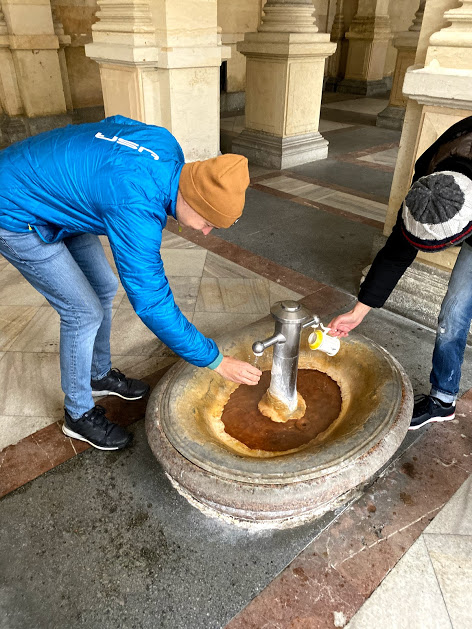 (Tomas, in blue, drinking from one of the many Karlovy Vary fountains)

I was contracted for three weekends of competition preparing skis, and we were coming up quickly on my second. Also hanging in the not so far back portion of my mind was the American Birkie on February 22nd, for which I felt completely unprepared. And it was probably that week on the Czech border, with hardly any snow to train on, that peaked my anxiety. That week I only logged three hours of total training: two days of intervals and one easy ski, six weeks ahead of the one ski race I’d registered for for the entire season (spoiler alert: I majorly compensated for that lack of training the following week in Norway). But I tried not to let it bother me, and to focus on the task at hand: make fast skis.

The whole week was warm and wet and the little snow remaining was melting fast. Klingenthal, the original venue, would be unable to host the next competition, and the other options were dwindling. By Thursday the decision was made to have jumping at Klingenthal Friday night and Saturday morning, and the ski races in Oberhof (two and a half hour’s drive) Saturday night and Sunday morning. This actually worked out well for me. I’d have time to pack the van after Sunday’s race and still make the overnight ferry to Sweden that night. 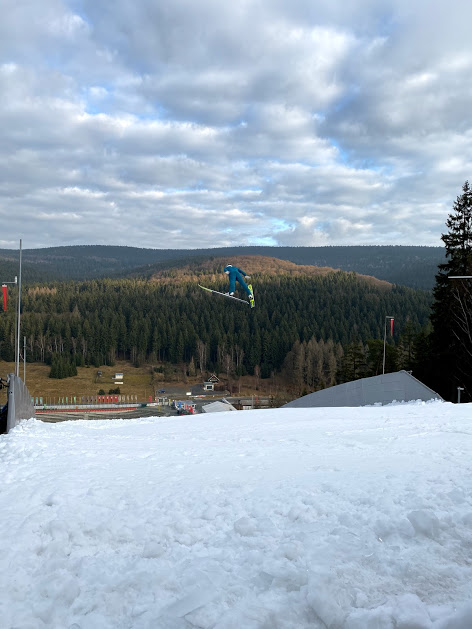 So Saturday morning the team headed to the jumping hill, and I drove the two hours northwest to Oberhof to ready the wax room for that evening’s race. It was quite the scene. Apparently I’d left a bit too early because upon arrival there was no one to be found, anywhere. There was some kind of Junior event going on, but no one affiliated with the Nordic Combined Continental Cup was around. The parking lot was virtually empty. I eventually tracked down some maintenance workers on break in their office and tried to communicate as best I could that I needed a key to the wax room. They sort of shrugged me off and said they’d make a call. Ten minutes later an Audi flew into the parking lot and its driver handed over the key.

When you have approximately two kilometers of man-made snow and a week of rain, the result is dirt, and some rocks, and a little snow. But the snow was more like crushed ice. I prepared at least eight pairs of skis with fluoro powders, and tested four or five structure patterns. Most skis were probably on the snow for an average of 45 seconds, and when I began to clean them afterwards, my paper towels were black after one pass from tip to tail.

Since only Jared was racing that evening, Tomas and I tested a pair of older white-based race skis against a pair from the fleet and found them on par. Better to save the freshly ground skis for better conditions if possible, we decided, and the white bases tended to resist dirt better than the black ones. Jared ended up having a pretty good race, and apparently the skis worked well for him. So it was back to the hotel in time for dinner to try to get some sleep before an early morning, and a big day Sunday.

An early start (8:45 am) meant less time for ski testing. Luckily, the conditions had hardly changed from the night before, and I now had Tomas there with me the whole time since the jumping competition corresponding to that day took place Friday evening. Complicated, I know. Together we tested upwards of fifteen skis in about half an hour, probably some kind of record. And I was packing the van before the race even started. The ferry was leaving Kiel (the North coast of Germany) at five p.m. for Sweden, and I had six hours of driving on the Autobahn to get to it. Not only did I have my eye on getting to snowy Norway as soon as possible, but leaving Sunday made driving on the Autobahn significantly less hellish. More on that in my next edition: “Driving the Length of Germany on the Autobahn in a Huge Cargo Van on a Monday.” 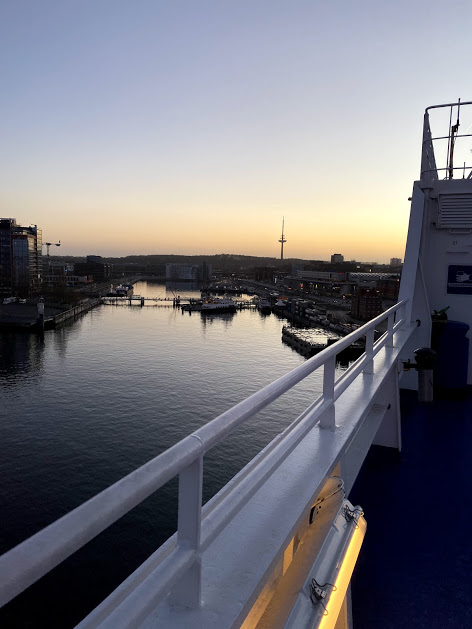 (Leaving for Scandinavia on the overnight ferry, looking back at Kiel, Germany)